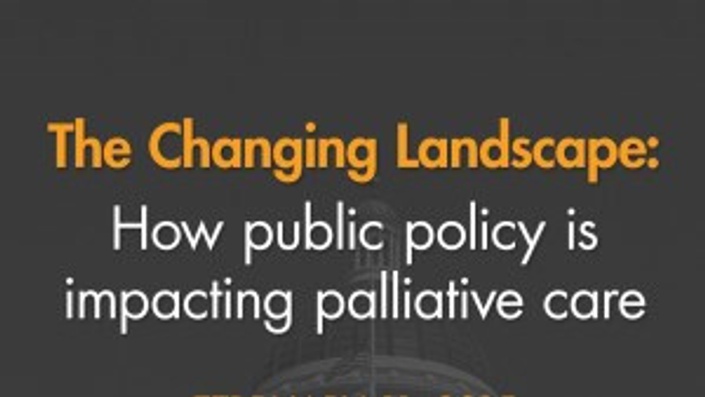 Implementation of SB 1004, which mandates that Medi-Cal managed care plans facilitate delivery of palliative care services, is one of many factors which will transform palliative care in California.

Tune in to “The Changing Landscape” for an in-depth look at bills and regulations impacting palliative care, and find out what this means for you and your patients.

Online Education
Available in days
days after you enroll An optometrist and local businessman, Senator Dr. Ed Hernandez, O.D. was first elected to the California State Senate in 2010, and was re-elected in 2014, after serving two terms in the State Assembly. He is Chair of the Senate Committee on Health, a member of the Business, Professions, and Economic Development Committee, the Government and Finance Committee, the Committee for Governmental Organization and the Senate Insurance Committee. He is currently working on legislation to improve access to quality health care for all Californians, and proudly represents the 22nd Senate District, which covers the majority of the cities, county areas and neighborhoods of the San Gabriel Valley.

Kathy Brandt, the Principal of the kb group, has over twenty-five years working in hospice, palliative care, aging, and caregiving at the national, state, and local level – 16 of those with the National Hospice and Palliative Care Organization.For seven years, Kathy worked at Suncoast Hospice where she created a community engagement model, Project DECIDE, which led to Suncoast being named as a Robert Wood Johnson Foundation funded Rallying Points Regional Resource Center.

Devon Dabbs is the Co-Founder of the Children’s Hospice and Palliative Care Coalition (CHPCC) and currently serves as Executive Director. In this role, Devon spearheads policy initiatives and creates programs, which are dramatically improving care for children with life-threatening conditions in California, including the enactment of the Nick Snow Children’s Hospice and Palliative Care Act of 2006. CHPCC and Devon herself have received numerous awards including Devon being named Santa Cruz County Woman of the year in 2007. Devon has served on several boards for organizations working to improve hospice and palliative care.

When does the webinar start and finish?
Once you enroll, the webinar will be available to view immediately. The webinar is a completely self-paced - you decide when you start and when you finish.
Are continuing education credits available?
At this time, we are unable to provide continuing education credits for these recorded webinars. CEs are available for social workers, nurses, nursing home administrators, and chaplains with many of our live and in-person trainings. For more information on our upcoming education, coalitionccc.org/training-events.
I am not a member of the Coalition. How can I join and get member discounts?
Join online when you register for the webinar, or join online today at coalitionccc.org/membership! All purchases at the member rate will be confirmed by CCCC’s staff.
I think I am a member. How can I confirm my membership status?
Contact us at [email protected] or (916) 489-2222 to confirm.